No More Luck; No More Coincidence

I have been having this internal dialog that goes something like, "What do you want to do today?"
"I dunno. What do you want to do?" To say I have been in a rut is an understatement. Between the weather, the issues in the news that won't get resolved and won't go away, my boss who clearly wants minions, and my energy level that exhausts itself by 7:30 every night with NASA clockwork, I have been teetering by.

To make matters worse, I finally got a Facebook page, which really only serves my inner voyeur and ingests my time like a bloated kid sucking down greasy french fries.

Something happened a couple of weeks ago that has me on a new path, but to where I have no idea.

It started with a business dinner with my husband... a banquet actually. This was something for his dirt racing series. In PR terms, it should have been an easy win; we hand out money and trophies, the racers exercise their egos and exorcise their complaints from the previous season, ready to hand over agreements for the next racing season with full expectation that we have a partnership. This banquet, however was all about pulling the rug out from under them and us with checks smaller than what they wanted due to lacking sponsorship and an announcement of a new tire from Goodyear, along with it a promise of more cash for next year. The problem here is that racers don't like change. They want more money but they want it magically to appear without their involvement. They also, these "winners" that we were celebrating, have tire deals with two other brands that include "cheating" tires that will tech in as legal, but give them an unfair advantage. How this happens would require me to pay much too much attention to the engineering of tires. That is why we have techs.

My husband, who owns this series, gave a speech that was a PR nightmare and all the boogeymen responded. It was a horrible evening that ended in my resolution that I would never go to another dirt car banquet. At that, Tom announced that we would now be referring to them as Racing Dinner Parties. Not going to those either.

That night really showed me that our staff was not loyal, the racers thought they owned the series, and Tom's expectation of these people was unrealistic. Over and over in my prayers that sleepless night, I asked God to stop making me feel so alone. Where was He as this stuggle boiled on that night? Does this sound funny? To look for God at a Dirt Car Racing Series Banquet is quite an abnormal task. That probably was the real problem: not feeling God's presence while trying so hard to engage Him.

I finally woke up after at least some bit of sleep that night with a message from God. Now don't misunderstand me, if you told me that God spoke to you, I would suggest that there are probably medications for treating that. I have always thought, although I believe that God guides us, that it has been a long while since God has spoken to anyone. Just a week or so prior, someone was telling me about a book she was reading that suggested praying in wait, no blathering, just waiting for God's message. I woke after that brief sleep with the words 'Serve Others More' freshly placed in my mouth. I knew instantly that is was the response I had requested from God. God was there. God was listening to me. God gave me the answer to "What do you want me to do?"

I have no idea what to do with this.

Then, I hear a very unexciting interview with an author on NPR. Nothing stirs me but somehow I remembered hearing the title of his book. The author in the interview as Chris Cleave. The book was Little Bee.

Over this past weekend, I found the book, buying only because the back cover asks the readers not to tell others what happens in the story because "the magic is how the story unfolds". I started reading it on Sunday, missed Sunday school and church and did not go to church with Tom that evening. I completed it a few hours before I had to go to work on Monday. It was remarkable. After I read it, still thirsty for more, I read the author's interview at the back. Chris Cleave described that one of his influences in writing this book had to do with the story of an Angolan man named Manuel Bravo who hanged himself in order to save his son from being deported the next day back to Angola where he would have been killed.

After reading the novel whose title character is a refugee fearing repatriation, I did not shed one tear until reading the notes about this man from Angola. To decide between your life and someone else's was a clear theme in the book, but to get the slap of reality, a reminder that people do make that choice, was just too much to take on no sleep.

I could find no one who had read the book. It is on the New York Times Bestsellers list. It is #1 on the list right now. I suddenly realized I had gotten too far from books and so had everyone I knew. Even so, I kept having this nagging feeling, a reminder that I was to serve others more. Somehow this book found its way into my home and head. Seemingly, there is a reason for that.

After finding no one with whom to discuss this book, I read an email from a local bookstore that this author is on tour and will be in town on Wednesday. That seemed so surreal that the person I would have to discuss this book with was the author. And last night, I did just that. 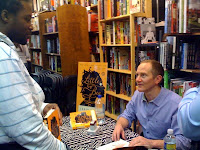 Chris Cleave was a beautiful little man. Very British. Very funny. He talked about writing in a shed he build that leaked, about his little boy who was the source of the character Charlie in the book, who any good insomniac reading the book would have known due to the author's notes. He talked about using kids as a literary tool to hold characters together and symbolize the future. He talked about how the least in society and how they are treated shows our values. He talked about oil fields in Nigeria that have enriched corporations and their corrupt federal government while keeping those who survive in the area in poverty; how the methods for drilling have ruined the local agriculture. He talked about writing in the voice of a woman and the magic of believing that children offer. It was quite a forum. I sat there, thrilled to have been there when the planets aligned, amazed that I had just found this book, just read it and here I was.

There was a man in the audience who asked him about his first novel called Incendiary. It was scheduled to be released July 7, 2005. The book is a letter to Osama Bin Laden from a mother, again, this author likes to write in the voice of a woman. It imagines a terror attack on London. Giant posters where hung in the subways in London as part of the hype to introduce the book. On them, there was the London skyline and smoke with the date July 7, 2005 at the top. Who could have known that was the day that someone would set a bomb in the subways under London? The man in the audience was living in London at the time and only missed being part of the chaos, he told us, because he chose not to go to work that day. Chris Cleave described how all the posters had to be removed from the subways and every where else and that his book's release was delayed. It was remarkable that this man was there last night and added another element of craziness to this.

As I was standing in line to have my book signed and to speak to the author, a woman started talking to me. By the time I got up to the front, I knew that she was a graduate student planning to travel to India this year, that she found this author on NPR's facebook page (so I had to smile at that), and that she hadn't read the book but we exchanged email addresses so we could discuss the ending. We also pulled the guy from the audience who was living in London in 2005 into our conversation. This was weird. I don't talk to strangers. I don't give strange women my email address. Why were they in my path? It really felt like they were put there on purpose. It was just so... weird.

The whole experience just landed in my lap. It felt planned. Not by me. Planned nonetheless.

So what do I do with this? How do I use this to Serve Others More? I was just getting over being freaked out by having God speak to me. I know that this was not just coincidence. I was too aware of the surreal nature for that. Now what?
at 5:43 AM 5 comments: