Removing Thread from the Upper Tension Unit on Brother PE-770 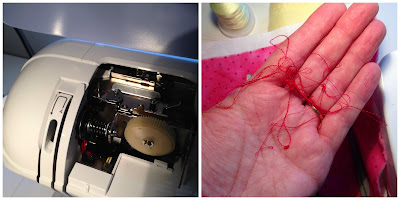 After almost three months of excitement over the wonders of my embroidery machine, a Brother PE-770, something happened.  I looked up to see that my thread had shredded and was knotted up and had magically disappeared in my machine.  I was stunned.  And I was in denial.

I re-threaded, and kept sewing... and noticed some stitch quality issues. Realizing that thread doesn't simply disappear, I tried the "use unwaxed dental floss" method that is often suggested on the Facebook Embroidery Message Boards, and still nothing.  So I kept sewing, in my child-like hope that stuff will just work itself out, until I couldn't deny it any more.  I had a problem.  I just didn't know where the thread was.  Similar stitch quality issues posted on the embroidery message boards kept insisting the problem had to do with the bobbin case.

So I took off the throat plate, since I knew how to do that, using a penny to unscrew it, and peered down.  I found one of the tiny threads that posters are always showing as the culprit.  I knew this was not my problem.  My problem was red thread, a big glob of it, that disappeared at the top of my machine.  Despite that, I lifted out the bobbin case and vacuumed the area.

In desperation, I even used canned air despite the warnings on the message boards not to.  I used a mirror and tried to look up the machine from the needle, hoping to see the thread dangling from a mysteriously hidden place.  Nothing. I changed my needle, my bobbin, I re-threaded... and re-threaded again.  I just wanted to see inside but was afraid to do anything that would "hurt" my machine or make things worse!

Finally, I contacted my favorite machine repairman, Nelson Maynard, who worked at Baer Fabrics for many years as a repair technician during some of the same years I worked there.  Baer's had a Bernina and Babylock dealership for decades.

Nelson started his own repair service after the store closed so I trusted his opinion on this and I was just desperate enough to ask the favor of what he suggested I do.  This was his response: 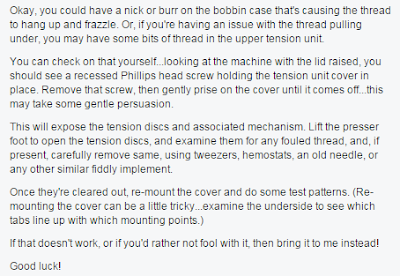 That was magical information!!  Once he said I could check on that myself, I had some courage. Following his advice....I found the screw hole he mentioned.  The screw is tiny and set in deeply. 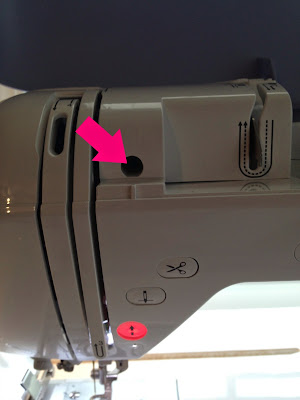 And I removed the cover over the tension unit as he suggested.  I immediately saw the red thread!! 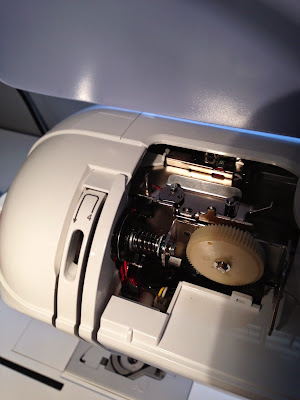 I lifted the presser foot as instructed.  That opens the tension discs so that the thread slides right off.  I removed the thread using the long tweezers that I use for my serger. 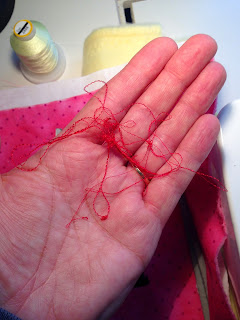 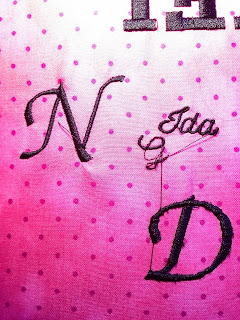 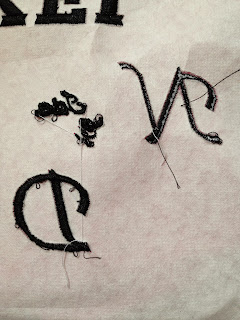 And now this statement from me to you:
This solved my problem!  I am not suggesting you do this.  I am only sharing what I did to solve my stitch quality issues in this instance.  Also if your machine is under warranty, you will want to consider that Brother says the warranty is void if you open the machine in any way.  If you are in doubt, you should contact the Brother Corporation or your local authorized repair person.

If you are looking for a repair person, and are not too far from Lawrenceburg, Kentucky, check out Nelson Maynard Sewing Machine Service and Repair (click here) or contact him via email at nkmaynard2 at gmail dot com.  He has experience with all sorts of machines (check out the photos on his Facebook page!) and he has tuned up my sewing machine and serger for many years when I worked at Baer's (which means it has been too long since my last tune-up!)  Nelson is a real character, usually donning denim overalls but can occasionally be spotted in his kilt.  He is also a writer and an all-around good guy and totally trust-worthy.  And nope, he didn't pay me a thing to say this nor did he ask me to!

And now this statement from Nelson to you:
"There are a couple of good reasons that this sewing machine repair man feels that every home sewer should keep her (or his) machine in the good condition.

For one thing, it's a lot easier to work on a machine that has been well maintained than on one that has been neglected; I can turn around a machine a lot more quickly if I don't have to clear out wound-up thread from the shafts or evict small animals from the undercarriage.

For another, while I am happy to work on my customers' machines if they have significant mechanical problems, I don't want you to have to do without your machines for a week or two (or three, depending on my backlog) only to find out that there wasn't any significant problem to start with, and that a little bit of home diagnostics would have saved you  the time and expense of having your machines serviced.  (So, for instance, you bring me your machine, describe your problem, and put it on the table; I look at it, take the needle out, turn it around, and say, "Here ya go; that'll be eight-five dollars."  No, there's no way for that to be anything but awkward...)

So, while I'd suggest regular tune-ups to keep your machine in fighting trim, I think we are all well-served by watching out for your machine's well-being between visits."

And...he had this to add to me so I thought I would pass it along too because qualified and trusted free advice is rare.... 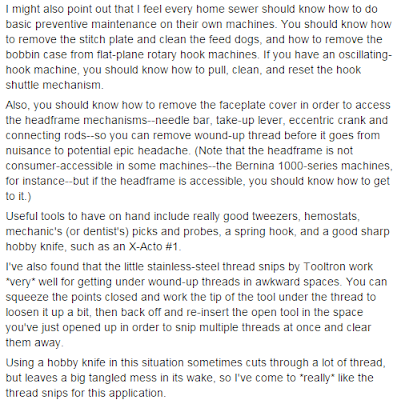 Thanks for checking out out my post today!  I hope it was helpful to you.  Check out my Embrilliance Software and Machine Embroidery page here on my blog (see the tab above or click the link) for my previous posts on embroidery, lists of my resources for learning and supplies with direct links, and my notes.

Links to all my pages, including my paper-crafting Project Gallery, are on the tabs under the header of my blog.